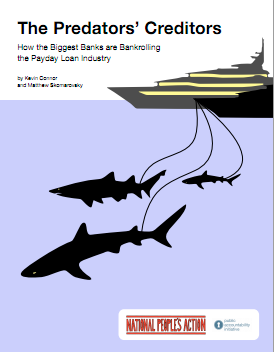 This report traces connections between the largest payday lenders and Wall Street
banks, including financing arrangements, leadership ties, investments, and shared practices. The following are some of the report’s key findings:

Payday loan companies depend heavily on financing from big banks, including Wells Fargo, Bank of America, and JPMorgan.

Many payday companies have strong ties to Wall Street.

Payday financiers are major bailout recipients, and continued to extend credit to payday lenders throughout the financial crisis and following the bailouts.4

Big bank financing of payday lending led to the rise of a powerful industry lobby which has successfully fought efforts to cap interest rates.

There are signs that the payday lending business will expand in the future.