California Governor Jerry Brown has presented himself as a climate leader and the media has largely portrayed him as such, most recently lauding his trip to Paris to attend the COP21 climate change negotiations. However, Brown’s relationship with the oil and gas industry complicates his image as a warrior for the environment.

Brown’s oversight of oil and gas production in the state has come under scrutiny in recent months due to allegations of significant impropriety. In November, the Associated Press reported that Brown had taken the unusual step of directing state regulators to research the “potential for future oil and gas activity” on his private land. The state’s top oil and gas regulator stepped down amid the ensuing controversy over the misuse of state resources on the governor’s behalf.

And in August, a lawsuit and press reports alleged that Brown had fired oil and gas regulators under pressure from Occidental Petroleum due to their unwillingness to expedite the issuance of drilling permits.

The industry has secured other favorable stances from Brown, including his resistance to pressure from environmental groups to ban the practice of fracking and other drilling techniques.

Overall, this record on oil and gas is surprising for a leader who has staked so much on his climate and environmental legacy.

Brown’s relationships with the oil and gas industry likely play a role in influencing his stances on these issues. This report details Brown’s ties to the industry through his sister, Kathleen Brown. The relationships, some of which have never been reported before, raise new questions about Brown’s handling of oil and gas matters.

Governor Brown’s sister, Kathleen Brown, has strong ties to oil and gas and fracking that have largely gone unreported. The relationships may be playing a role in shaping the governor’s handling of oil and gas matters and his muted response to a record-setting methane leak in Los Angeles.

view this map on LittleSis

Highly-compensated director in safety role at company behind methane leak

The gas storage well currently releasing record amounts of methane in the Los Angeles community of Porter Ranch is owned by a company where Governor Brown’s sister is a highly-compensated board member. She also plays an environmental, health and safety oversight role at the company.

The leak, called the worst in California’s history by Time, began October 23rd and is currently releasing 36,000 kilograms of methane per hour. It has forced nearly 2,000 families to leave the area, caused the federal government to implement a no-fly zone, and led Los Angeles County to declare a state of emergency. It has also resulted in a lawsuit by Los Angeles City Attorney Mike Feuer alleging public nuisance.

In its first month, the well leaked 800,000 metric tons of greenhouse gases, equivalent to a quarter of the entire state’s emissions in that period.

Governor Brown, returning from COP21 negotiations in Paris that focused on the climate dangers of fossil fuels, has made no public statement on the methane leak, despite its environmental and public health impacts. His administration has resisted calls to declare a state of emergency, saying that it does not fit the necessary criteria. The issue is not expected to be resolved until March.

Press reports on the leak have not noted Governor Brown’s familial ties to the company, but Kathleen Brown’s role at the company is significant:

In outlining her qualifications for the directorship in its 2014 proxy statement, the company stated that “Ms. Brown has extensive experience in both the public and private financial sectors, as well as in-depth knowledge of California government processes.”

Lynn Schenk, a Jerry Brown associate and appointee, also serves on the Sempra board and sits on the environmental, health, safety, and technology committee. Her stake in the company was worth $1,071,898 at the market’s close on December 15, 2015.

Kathleen Brown is also a highly-compensated director and major shareholder in the Forestar Group, a real estate and oil and gas company that specifically cites increased regulation of fracking as a risk to its business.

Forestar Group’s oil and gas business is focused on exploration and production on owned and leased mineral interests in Nebraska, Kansas, Oklahoma, Texas, and North Dakota. It became an exploration and production company in 2012, when it acquired Credo Petroleum. Oil and gas revenues were $84.3 million in 2014, or approximately 27% of the company’s total revenues of $306.7 million that year.

Forestar Group specifically cites increased regulation of hydraulic fracturing as a risk factor in its annual report, noting “Hydraulic fracturing…and other subsurface injections have come under increased scrutiny and could be the subject of further regulation that could impact the timing and cost of extractive activities.”

Her stake in fracking through the Forestar Group has never been reported in the press, but it is significant.

In stating her qualifications for the position in its 2014 proxy statement, the company said that she has “government and industry relationships relevant to our markets and business activities.”

The project, Hidden Creeks Estates, has provoked significant opposition from a variety of local and environmental groups. One of them, Save Porter Ranch, has also been active in opposing fracking and other drilling activities in the community and sued SoCalGas and Sempra Energy in early December 2015 over the companies’ leaking gas storage well.

The Hidden Creeks project is still in the permitting process. Coincidentally, the project requires an easement granted to the city by SoCalGas, according to the draft environmental impact statement.

Kathleen Brown’s primary employment is as a partner at Manatt Phelps, where she is in the government and regulatory practice. Her clients and activities in this position are not disclosed (she is not registered as a lobbyist in California). Though energy is not listed on her Manatt profile as one of her practice areas, she is part of an infrastructure group that focuses in part on energy.

Additionally, the Wall Street Journal cited energy as one of industries she was interested in when she joined the firm in 2013, because it is undergoing “transformational change.”

Manatt Phelps added the state’s largest oil and gas industry lobby, the Western States Petroleum Association (WSPA), as a client in 2013, the year Kathleen Brown joined the firm. It earned $461,008 from the contract that year, according to the group’s most recent tax return. However, there is no evidence that Brown worked on that account, and the nature of the contract is not specified beyond the description (“legal-consulting”) given in WSPA’s tax return. 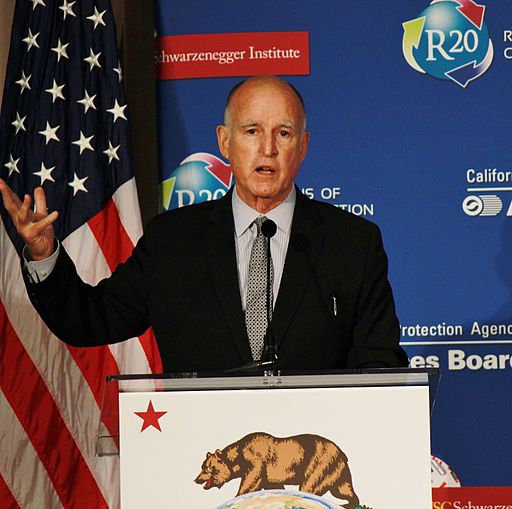 Governor Jerry Brown in 2014 by California Air Resources Board (CC BY 2.0)

Though the significance of family ties can sometimes be difficult to discern, it seems clear that Kathleen Brown maintains a close relationship to her brother.

She has commented on her brother in press reports, and on returning to California, she spoke of “a heavy lobby” to bring her back, saying “a family tie is hard to break.” Kathleen was also a delegate to Governor Brown’s 2014 trade and investment mission to Mexico. Her brother also recently appointed her husband, Van Gordon Sauter, to the California State Athletic Commission.

PAI has reported on family ties to significant effect in the past. In 2014, PAI’s research (through its related website, LittleSis.org) exposed the role of Senator Charles Schumer’s brother in the Comcast-Time Warner Cable merger, prompting the recusal of the Senator from oversight of the deal as a member of the Senate Judiciary Committee.

Are family ties helping shape Governor Brown’s stances on the issue of oil and gas production? Are they influencing his response to oil and gas-related crises like the Porter Ranch methane leak? And do they create the appearance of a conflict of interest that will undermine public confidence in Governor Brown’s leadership on oil and gas matters?