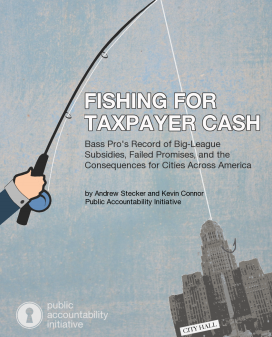 This report offers an in-depth look at Bass Pro’s record as an economic development anchor in cities across the country. Bass Pro, an outdoor sporting goods store, has won hundreds of millions of dollars in taxpayer subsidies from cities and states by promising retail tourism, development, and economic revitalization. A review of Bass Pro-anchored projects shows that while Bass Pro itself tends to attract shoppers, it frequently fails to deliver on promises of economic benefits.

The Public Accountability Initiative’s initial interest in this subject was prompted by a Bass Pro proposal in Buffalo, NY. The report has a special focus on that proposal, which is typical of Bass Pro projects around the country.

Key findings about the Canal Side Project in Buffalo, NY: