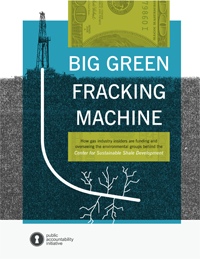 Much has been made of the recently announced Center for Sustainable Shale Development (CSSD), a Pittsburgh-based partnership between 11 fracking companies and non-profit groups. The CSSD bills itself as a Leadership in Energy and Environmental Design (LEED) for the gas industry, putting forward a set of 15 standards for fracking and certifying drillers that voluntarily comply with those standards.

Though CSSD’s materials and the news media have touted the group’s independence in certifying drillers, CSSD appears to be less a guarantor of fracking’s sustainability than a “greenwashing” campaign controlled by the natural gas industry with the cooperation of a few philanthropies and environmentalist organizations with considerable ties to the natural gas industry.

(Click here to read the full report as a pdf)

The following are major findings from the report:

The national debate about fracking has seen the use of a variety of tactics to portray the natural gas industry as safe and friendly to the environment. Gas companies have set up front groups such as the American Clean Skies Foundation to push for natural gas, paid for “frackademic” research that asserts that fracking is safe and beneficial, and co-opted environmental organizations to further their message.

The Center for Sustainable Shale Development combines several of these tactics, and appears to be the latest industry effort to paint fracking as a sustainable and environmentally sensible extraction process.

The data in this report can be found on LittleSis, PAI’s investigative research site, by viewing the profile page for the Center for Sustainable Shale Development »

Do you want to support PAI’s watchdog research? Donate here!