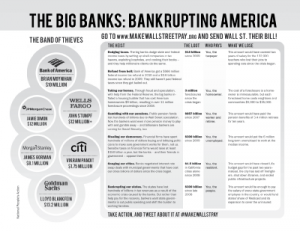 Wall Street banks caused the economic crisis that has left millions unemployed, foreclosed-on, and without prospects in the worst economy since the Great Depression. This crisis has, in turn, caused massive tax revenue shortfalls for the federal government and for state governments across the country: nearly $300 billion combined for 50 states in the years since the crisis began. To deal with these budget woes, politicians are cutting public spending: laying off teachers, attacking public sector workers, raiding pensions, closing hospitals, and eliminating essential services for children, veterans, and the elderly.

Raising revenue from the wealthy, bailed-out banks that caused the crisis would be a far more sensible way to address these budget woes. This report analyzes data from the latest financial filings by the six big banks — Bank of America, Wells Fargo, JPMorgan Chase, Citigroup, Goldman Sachs, and Morgan Stanley — to expose the ways in which they continue to avoid taxes and add to government deficits, rather than support an economic recovery that will put people to work, keep people in their homes, and preserve the safety net.