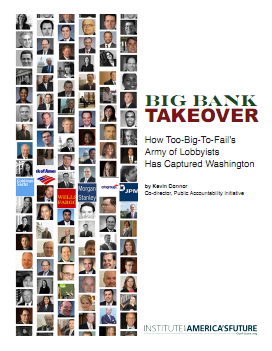 Throughout the financial reform debate, the finance industry has waged an unprecedented assault on the democratic process, spending an estimated $1.4 million per day to influence Congress and hiring 70 members of Congress and 940 former federal employees to lobby on their behalf.

The six biggest banks—Goldman Sachs, Bank of America, JPMorgan Chase, Citigroup, Morgan Stanley, and Wells Fargo—account for a disproportionate share of this activity. In the two years since the first federal bailout of a big bank (Bear Stearns), these banks and their principal trade associations have hired over 240 former government insiders as lobbyists and spent hundreds of millions of dollars on an influence game designed to thwart reform, shape bailout programs and maintain their status as “too-big-to-fail” institutions.

The big banks have employed an unrivaled network of in-house lobbying teams, hired guns, industry associations, front groups and behind-the-scenes influence peddlers with deep connections to Congress and the Obama administration, including the leadership of the House Financial Services Committee, the Senate Banking Committee, the Treasury Department, and key regulatory agencies.

The lobbying spree is taxpayer-funded—it follows $160 billion in bailouts from Congress and trillions in cheap loans from the Federal Reserve. And as their influence has come to be viewed as increasingly toxic in Washington, the banks have shifted segments of their political activity to a “shadow lobby” that includes such front groups as the U.S. Chamber of Commerce.

Many of the current big-bank lobbyists were architects of the too-big-to-fail banking regime while they were employed in Congress or elsewhere in the federal government, and they are now drawing lucrative salaries from the banking behemoths they helped create. Now, on a range of issues, the big banks’ armies of lobbyists have scored victories that assure the continued existence of Wall Street’s casinos, despite the threat they pose to the American economy.

Findings from the report

Released in partnership with the Campaign for America’s Future.