Three years into the Wall Street-created economic crisis, Californians continue to lose
jobs, homes, and billions in personal wealth, leading to record budget deficits. California is the hardest-hit of all states with the highest number of foreclosures in the United States. 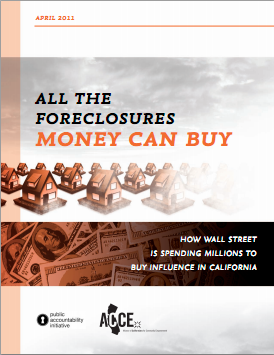 At the same time, Wall Street has flooded the state capitol with $70 million in political cash and used its influence to fight meaningful reforms to stop foreclosures and put the state’s economy back on track. New data reveals the extent of political spending by big banks, their industry associations, and the financial industry as a whole from 2007 to 2010 in California (totals include campaign contributions and lobbying
expenditures):

To put the numbers in perspective, the financial industry spent nearly $50,000 each day during the last four years.

At the same time, Californians are paying a steep price for Wall Street’s predatory and risky lending practices and political influence:

In the coming months, the state legislature is set to consider a number of reforms to reduce foreclosures and mitigate their costs to California taxpayers, including the Homeowner Protection Package (see final section), but the banks’ continued influence over the political process threatens to derail these attempts to address the crisis. Will Wall Street win again, at the expense of everyday Californians?

Released in partnership with the Alliance of Californians for Community Empowerment (ACCE).